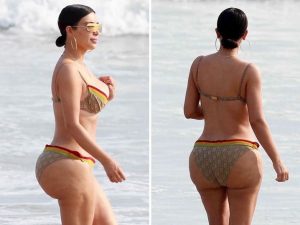 Unless you’ve been hiding in the deepest depths of the internet away from everybody else, minding your business buying human bones and watching decapitation videos, you’re aware that BBLs, lip-fillers and everything in-between have crept their way into the lives of normal folk. Normal women-folk, should I say, because it seems that men aren’t subject to the same pressure with regards to their physical appearance. Sure, there are men getting beard and hairline transplants… but that’s as far as common, invasive treatments for men go. I also don’t think there’s a desire for ‘mum-bods’ as there is for dad-bods, but alas.

Once upon a time, most of us could only sigh in amazement as we saw celebrities with chiselled faces and voluptuous bodies. Now, it’s within reach for a lot of us who are willing to make some sacrifices to the quality of our lives. It’s scarily accessible; women can now opt to purchase a body modification for less than the price of a car, depending on how reputable she wants to go and whether or not she wants to actually live to enjoy the fruits of a dodgy doctor’s labour – and I’m sure there are a lot of women who will happily ride a bike for a couple of years if it meant they had two brand new bum cheeks to show off. I remember a time where these new bodies were mocked; her lips look swollen! She looks like she needs her nappy changed! Why does she look like a man who can’t smile? Does this not firstly highlight how ever-changing these standards are? Only now it’s not about new makeup techniques – you’re changing your features and sometimes putting your life at risk.

On the other hand though, I notice I mentioned “sacrifices to the quality of our lives’, when the truth is a lot of women are doing it to improve the quality of their lives. Beauty standards are so ingrained into the minds of some people, to the detriment of their mental health, placing them into a perpetual state of anguish because they’re not as attractive as the girls whose pictures their man-who’s-not-their-man is liking on Instagram. “Improving” the quality of your life based on a fickle beauty standard that will change within a few years, when your implants have sagged, your lips deflated, your nose bridge collapsed is… risky. I’m all for improving your appearance if you want to and you have the means – but never if you don’t fully understand what you’re getting yourself into. I’m especially against anybody undergoing a procedure but claiming to be natural, particularly if you’re in a position of influence.

One major argument I always hear about enhancements is ‘you’re doing it for men.’ I am conflicted. On the one hand, I agree. But hear me out, because it’s not for the snarky reasons you might think.

First of all, procedures like BBLs and boob jobs are undeniably for sex appeal – there’s no doubt about that. They’re specifically designed to enhance your ‘assets’; you literally want to make your body look more f*ckable, whether that’s for men around you, the man you’re married to, or to the women you want to envy you because of how f*ckable you look to the men. I know this is ‘heteronormative’, before anybody complains, but humans are (generally) inclined to reproduce – the desire for this kind of enhancement stems from wanting to show our male counterparts that we’re a good vessel for baby juice. Since then, it’s evolved to simply wanting to keep up with beauty standards and improve your confidence, but beauty standards are always designed to make you attractive, and that’s inherently why.

And so what? Isn’t everything everybody ever does to improve their appearance an attempt to be more desirable? Are we not mostly biologically programmed to look for a mate with whom to procreate; isn’t that why, as women, we look for affection and attention when we’re ovulating, why we feel happier and more confident? Most things people do in order to make themselves ’attractive’ are a mating call – peacocks fanning their feathers in a massive pompous show, birds trying to out-sing their peers in a bid to win that bird cooch. Everything we do is subconsciously an effort to be desired – yes, that includes those in a relationship. It would just be that you’re (hopefully) trying to be more desired by your partner. Some people want to be desired by other people too, just to show their partner they’re desired. Weird, but if your partner isn’t giving you enough attention, who am I to judge.

With that in mind, what makes a BBL any different to makeup? What makes a boob job any different to figure-hugging dresses? What makes any of these any different to men getting fades and shaping up their beards? To feel attractive and look masculine, yeah, but to whom? Even if you genuinely don’t do it to attract anyone, feeling attractive makes us feel good, and attractiveness is just based on what society tells you it is. Whether you like it or not, you are still succumbing to some form of pressure from society. You wear makeup for yourself, because it makes you feel good, but why does it make you feel good?

Now I want to emphasise, again, that it is never a bad thing to want to improve your appearance. For a lot of us, we genuinely do it because it makes us feel good. My point is not that we personally want to attract people, but that beauty standards in themselves are based on how we are perceived by others. Thus, inherently making everything we do for the opposite sex, even if we personally don’t care for that. Make sense?

So what pushes a person to go under the knife when they have a partner who loves them as they are? In essence, pretty privilege. Opportunities come a lot easier when you look like the typical beautiful woman… and don’t forget, ‘typical’ beauty is defined in a patriarchal world. I guess deep down there’s also a feeling that your partner would like you more if you did look like the pretty girls he sees on Tik Tok challenges. There’s also the pressure that people around you are chipping and chiselling themselves to perfection, and you’re surrounded by more and more competition. I know you love me, but the pool of attractive people is widening. The girl with no lips and no hips suddenly has a prolapsed bumhole on her face and a massive bubble butt and it looks better than my naturally curvy body. He might say he doesn’t want me to look like her, but he has to say that!!!

It affects your confidence, of course. That’s why we care more when he likes pictures of a plastic whore than of an androgynous gremlin. As humans, we’re naturally competitive. We want to be the prettiest, the most successful, the most talented, the funniest in the room. We want to be better than everyone else, or at least we don’t want to get left behind. Being naturally pretty isn’t enough when bland people are able to be strikingly beautiful with the right amount of money.

The thing you need to remember is that no amount of money can buy you a good personality. Everybody tells everybody this, but I’m not sure many people actually believe it. You wanna get to a point where you genuinely know that nothing comes close to character, and would you rather be a prolapsed-butthole mouthed bitch or a hilarious bitch?