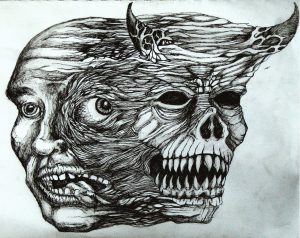 ‘Please, just fucking let me go,’ she said slowly, trembling, and making sure I heard every single word.

I didn’t want her to go and she knew it wasn’t me, I just wanted to calm her down. I – whoever that was – probably hurt her, but that wasn’t me. It was not me.

Still, she could’ve screamed. She could have shouted, banged on the walls so people heard her; she knew how thin these walls were. She could have had someone running to rescue the damsel in distress, but she didn’t want to be saved. Because she enjoyed this. She would always come back to me because she loves me. I barricaded the door and that was the last thing I remembered when I was there.

‘Please,’ I heard her whimpering. I blinked and I was no longer by the front door; I looked down and saw myself holding her against the wall by the bathroom, my hand wrapped around her throat. Her eyes were bloodshot and her face looked slightly swollen. Her body was stiff and unmoving, the way it is when you’ve given up fighting and you’re bracing yourself for the worst. It took me four seconds to register what my hands were doing and I immediately removed them from her neck, allowing her to scurry to the corner of the bed.

‘Fuck,’ I whispered, looking down at my hands.

‘Tell me what just happened, what did I do to you?’

She couldn’t look at me, so she stared out of the window, and continued to sob silently. But she looked tired. Exhausted, even. She rolled her eyes and shut them, which pushed a stream of tears down her cheeks, and said ‘nothing.’

‘We’ve been here before,’ I said, trying to stay calm. ‘I told you not to make me angry, because that’s how this happens. You know this, you know I hate it more than you do.’

She refused to look at me and I couldn’t tell whether she was scared or fed up. Or both.

‘Look, I’m so sorry. I know you deserve so much more than this, but we’re going to get through this. I just need a little bit of time and we’ll be there… are you going to leave me?’ I asked, softening my eyes a little as I stared at her.

I winced and grabbed the sides of my head. Fucking stop, fucking stop. Stop, stop, stop, she’s not going to leave me. Stop it.

She knew what was happening because she looked at me for a split second and I caught the concern in her eyes before she could hide it. They were right; she’s never going to leave.

She paused and her eyes moved from one corner of the room to the next, the way they always did when she realised there was no point in trying to fight it. Mostly because she knew she couldn’t live without me. Partly because I’d turn up at her house at four in the morning and kill any man that she ever looked at after me.

I breathed a sigh of relief. I knew she would say that.

‘Good,’ I said, as I walked over to her, smiling. I reached out to touch her cheek and she flinched, turning her head. I didn’t like it when she did that.

I looked at her, puzzled, and tried again. This time she didn’t flinch, but her eyes welled up again. She tried hard to concentrate on whatever she saw outside the window as I snaked my hand softly around the side of her neck and the back of her head, stroking her hair in the process. She hated it, and it felt like a bitch. She hated my touch, but she never stopped me because I terrified her. I hated that she was scared of me.

‘It just… hurts that you’re almost disgusted by me, that I can’t even touch my woman, the love of my life, without her squirming. You make me feel like a fucking monster. You know nobody could ever love you the way I do, right?’

She ignored me and continued staring out of the window, dazed. I needed to feel warmth, I needed to feel her love and she was being selfish. My fingers applied a little pressure into the back of her head to remind her that I was there, and I asked her again.

‘You know that, right?’ I smiled, my eyes lingering on her lips as I waited for an answer. ‘But even if I let them try, they still wouldn’t. Nobody would ever put up with the shit you put me through. But I’m here, forever. It’s just us, right?’

‘Yes,’ she whispered. Every now and then, I noticed her eyes dart towards the door. She was good at being subtle, but I was too observant.

I pulled her in and wrapped my arms around her, but she held onto her pride. I held her tighter and rested my head on hers as she stared out the window. She was warm and her body fit well with mine, even when she didn’t want to be there.

I timed my breathing to synchronise with hers until she softened in my arms.

My eyes shot open and I didn’t have to wonder where she was; I had a dead arm from where she’d been laying on me. Relief. I slowly slipped my right arm out from under her and grabbed my phone off the table, squinting to make out that it was 02:36am. I opened up the music app, scrolled once, and played the first song my thumb landed on. Einaudis Nuvole Bianche.

The soft, melancholy notes began floating in the air and I turned back to my side, snaking my hand around her waist. I began to plant the smallest kisses on her cheek, running my hands over her body, gently caressing and squeezing her until she woke.

She faced away from me, but the first thing I felt were her protests, pushing her elbow back into me to tell me she didn’t want to do anything; but she was tired, and could barely speak.

She does this all the time. She just feels like she has to be mad at you, but she wants it. It will make everything better, she’ll remember who you are. She’ll remember she’s yours.

I ran my hand up her leg to find the band of her shorts, pulling them down slowly as I waited for a reaction. She backed into me to thwart anymore movement and tried to wriggle my hands away, so I slowed down.

‘What are you doing? Not now.’ It came out as a barely audible slur.

‘Shhh,’ I whispered, biting on her ear lightly as I continued to pull them down. We fight, we make up. It’s how we are, we’ve been through this a hundred times. We were always brand new and in love again afterwards.

She turned around this time with her eyes still closed and tried to push me off, and I started to wonder if she really wasn’t in the mood. I realised that maybe I should stop.

She’ll come around. She just needs to wake up.

‘No, stop,’ she mumbled, desperately trying to hold onto her sleep. She flailed her arms out sleepily, and I grabbed her hands and pinned them above her.

Of course it was me, it was always me. Except when it wasn’t. I reached up to kiss her; she let me, without returning the favour, but her body had relaxed and she wasn’t fighting it anymore. I snaked my hand down between her legs and she didn’t stop me; she did want me.

She’s already wet because she’s thinking of someone else.

My face grew hot and I could hear laughter ringing in my ears and rattling off the insides of my skull. Stop. Stop it. She’s not thinking of anybody else; she wants me right now.

She moaned, tinged with affliction. The room started to spin.

I do. She loves me, she always wants me. I know how to make her feel good, I’ll show you. The laughter continued, getting louder and louder and ringing inside my head. I winced in pain as I held her hands tighter and pushed myself inside her, my eyes still shut and the voices still laughing around me.

I didn’t know if I’d been awake all this time, but my eyes snapped open to the dark room. Einaudi was playing on my phone, and she was asleep beside me once again with streaks of mascara dried up on her face. It’s 02:58am and I have a throbbing headache, but the room is free of the voices again and I’m grateful.

Don’t fall asleep again, she’ll wake up and do a runner.