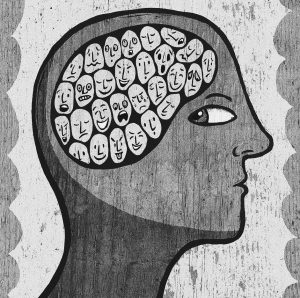 ‘Explain this to me. What the fuck happened?’

It’s 03:32am and we’re doing sixty down a forty. The roads are mostly empty, but I know this means we’ll be hearing police sirens any second now, and I don’t know how shady it’ll look when they open the door of a blacked out A3 to see two brown twenty-somethings with blood on the passenger seat. But I don’t tell Adam about the last part, because I want him to make it to the hospital alive without flipping the car.

I wouldn’t normally see a doctor for a cut, but I haven’t been able to move my hand for a while without fear of painting his seats red. I can’t feel my arm anymore and I think my fingers are about to fall off.

‘I don’t know, man,’ I sigh, too exhausted to even try to think about what happened. These days I just give myself a migraine trying to fill in the gaps; I can’t remember something I wasn’t there for. But I saw the marks on her neck, and what I do know is I did it again. I don’t know what else happened; we made up and fell asleep, we had sex, I think. She fell asleep again. I stayed up. Everything was fine. Then there was blood.

The lights outside are a blur.

Adam quickly looks down at the blood-soaked cloth I’m holding against my left palm, and his eyes keep darting to his seats, occasionally checking that I haven’t spilled any. I have.

‘Why the fuck…’ he mutters under his breath as he pushes his foot down on the accelerator, the engine growling.

Beneath his cool exterior, Adam is… dramatic. It’s nothing but a cut on my palm, I’m not going to die. I just need a couple stitches that I don’t have the equipment for, so I need a professional; nothing more, nothing less.

‘- maybe that you grabbed a knife the wrong way around. Wait no, how would that even happen? You were trying to cut an apple,’ he’s saying, waving his hand around and trying desperately to help me come up with an excuse. ‘You were drinking and the knife slipped because obviously you’re a fuckwit who doesn’t know how to use one. Yeah?’

I smirk. An apple at three o’clock in the morning after drinking; that’d explain why my rib cage sticks out further than anything else on my body at least. For all his theatrics, Adam is good with this kind of stuff, and he’s had enough practice saving me from the shitshows I land myself in. He’s a pro with excuses and, although he’s emotional, he’s also logical. He isn’t held captive by his idiot mind, unlike his best friend. He’s a good guy.

‘Actually nah you were outside, waved, and you fell on some glass. Yeah, that’s better.’

I can tell he feels relaxed now that we’ve got a story; I can’t tell them the truth, because I’ll end up sectioned. He slinks back in his seat and turns the music up, The Weeknd’s Hurt You filling up the car through the speakers, and probably spilling outside too; Adam has always kept the windows cracked slightly open because it makes him drive better when he knows he can hear what’s happening outside.

He’s better than you, you know

Oh please, not now. Not here. I already know that and I don’t have the energy for this.

Look at him. He’s coming to save you because you’re so pathetic! Look at him and then look at you.

I catch the corner of Adam’s face in the rear-view mirror. His eyes are dark and his hair… unkempt. But he has the effortless look of a man who is too secure in himself to care. Without the arrogance. He just really doesn’t care.

You wish you were him. Instead, you are you. On the way to a hospital because you’re an incompetant, emotional little boy with no control over himself. Isn’t that sad?

I shut my eyes hard enough to hear the thudding pressure in my head.

I’m knocked back to the car as my head hits the window and Adam is only just getting back into his lane, his eyes darting between me and the road.

His eyes stay glued to the road ahead of him and he slows down whilst he leans to his left to pick up the deep red cloth that has dropped. The police see a car swerving out of lane at twenty above the limit, we’re definitely getting pulled.

‘Are you having me on? What the hell just happened?’

My brain re-clicks with my body as the stinging pain in my hand reaches my head, and I grab the cloth before he can; I take a closer look at the wound before I ball the cloth up so I can press it into my palm again.

I shake my head as I slowly move my palm inwards as if I’m about to close it. The gaping gash oozes blood down my hand as the flesh either side squeezes closer together. It’s deeper than I thought. I open it up again, but a bit too much and a sharp pain shoots through my wrist, making me wince.

‘Listen, I don’t know what the fuck you’re doing right now, but can you stop. If you get that blood on my seats you’ll need a bodybag before the stitches.’

I smirk as I mop up the blood up from my wrist and hold the cloth against my palm again. It burns, but it feels good. I’m consumed by the dull stinging and the voices have stopped, or at least been silenced for now.

My eyes start to shut and I can finally concentrate; I hope she’s made it home safe.

Now Playing: Hurt You – The Weeknd