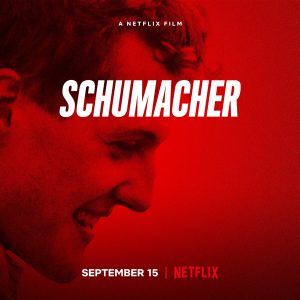 Tl;dr: if you’re not already a fan, don’t bother.

Or bother, but be prepared for some degree of boredom.

If you’ve watched the likes of Senna and Williams, you would have gone into this with high expectations. Michael Schumacher, seven-time world champion, indisputably one of the greatest F1 drivers there ever was and ever will be. A household name worldwide. You would be forgiven for expecting a gripping documentary full of passion and competitiveness, celebrating the life and career of a worldwide icon who has since suffered a horrific and devastating injury. If you know of Michael Schumacher but don’t know why you know of him, you would want the long-awaited title documentary to tell you exactly why he is known as one of the greatest.

The documentary is almost two hours long and, for most of it, you’re just watching a linear story of his F1 career – which isn’t interesting for people who don’t have a clue about him or F1, and isn’t interesting enough for people who already know everything.  Where it lacks, is in its withholding of what made the Michael Schumacher so great. It skirts past his prime for some reason unbeknownst to me – I will, however, praise it for being almost real. We all know how the media likes to sugar-coat the lives of those who are dead or otherwise just not okay, and considering this is a family-endorsed documentary, it didn’t do that to the extent that I expected. We know he was no stranger to dirty tricks, that he was a very controversial figure. I would argue that it didn’t show enough of that, but I would also argue that, even more-so, it didn’t show enough of what made him a huge cut above the rest. It just didn’t show enough.

It just… doesn’t grip you – especially not in the way Senna did. I hate to compare, but it’s inevitable at this point, because Senna stood out to me as a beautiful but gut-wrenching celebration of Ayrton’s life. It was the type of movie that you could watch as someone with no prior knowledge of who he was, and you would still come away feeling like you’d learnt about the greatest driver there ever was; you felt connected to the story. It was the type of documentary where, as soon as the cinema lights came on, all you could hear was sniffling from fans who couldn’t even move out of their seat to leave yet (true story – everyone cried).

I wanted that with Schumacher. I wanted a celebration of his driving career, his legacy, and I just didn’t get that. The documentary just glossed over his dominant years, those he’ll be remembered for. I wanted something that really celebrated his prime years, but I felt like I was just watching a really lazy and long YouTube compilation. The strongest point of the entire documentary were the words from his family – but the part that really gripped me was simply the final 10 minutes.

So, don’t get me wrong, there were parts that really tugged on my heartstrings; but I just don’t know if it would have that effect on everyone. You may have welled up when Michael was asked if it means a lot to him that his 41st victory puts him equal to Ayrton Senna, and he said ‘yes it does’ before breaking down into tears in front of the press. But the reason that makes you so emotional is because you know who they are and you know the impact that Senna’s death had on him. You hear glowing words from Sebastian Vettel as he talks about his idol and it warms your heart to hear it. But that’s because you know Vettel saw Michael as a hero and then went on to mentor Mick. Your chest hurt when a teary-eyed Mick said ‘I think dad and me, we would understand each other in a different way now. Simply because we speak a similar language, the language of motorsport… I would give up everything just for that.’ And that’s because you’re watching him race in a Formula 1 car now, thinking about how amazing it would be if his dad could just be there. You see clips of dad and little boy with a kart, but how much does that really mean unless you’re watching that very same platinum haired little boy competing in the sport his father once dominated in?

The Schumacher family is famously very private, and I can’t help but wonder if they have just bared themselves and their vulnerability for a sub-par documentary because they felt they had to put something out. I would hate to think that clips of an emotional Corinna and Mick wouldn’t move people the way they should. It almost feels like they made this documentary because they felt like they owed the public something, like it was done out of necessity. I’d say this is really a documentary for existing fans. I enjoyed it because I’m a fan – but that doesn’t mean it was good. Maybe my expectations and excitement for this were way too high.

I guess what I’m trying to say is… it was okay. It wasn’t great. It did not do him justice at all.

Would I watch it again? Absolutely. But I’m also the kind of person who watches the race highlights after I’ve already watched the race. Do with that information what you will.