I finally had my last exam yesterday! I have no excuse to tear my fingers away from this keyboard now, and just in time, as many blood boiling issues have found their way into my mind.
By now you will have heard about the further controversy of the Stanford rape attack. Just to clarify, even if I wholly condemn the way the victim was behaving or dressed, which I often do, the rapist is always at fault and should be killed in the most painful way possible. There is no reason to keep a rapist alive. I still maintain, however, that we need to stop living in delusion and must realise that certain things make you more susceptible to being raped or attacked. You gonna leave your front door open and not expect a burglar? No. For those who would accuse me of objectifying my own body – your body is YOUR house, just the same. Your body does not mean anything to a rapist or a murderer, it is just an object. Understand that. It is your responsibility to look after. Deal with it.
In a nutshell, Brock Turner, found sexually assaulting a woman in January, has been sentenced to 6 months county jail. Nothing longer because it would have a “severe impact” on him. Oh, and he’s really sorry; the poor guy is so shook up that he doesn’t even like ribeye steaks anymore!
I mention that precautions should be taken. In a letter, the victim said “if I hadn’t gone [to the party], then this never would’ve happened. But then I realized, it would have happened, just to somebody else.” Which is unbelievably true, and is why I’ll never say that a woman should just stay home every day, and this also supports my argument that rapists rape because THEY ARE RAPISTS. There’s no expecting a rapist to change. Taking precautions does not mean throwing your life away in fear. First and fore mostly, men and women have to understand that YES MEANS YES and ANYTHING OTHER THAN YES MEANS NO!!!! IT’S LITERALLY THAT SIMPLE!!! But some are incapable of caring, and alcohol also affects it. At the same time, women need to understand that we are evidently a species that hasn’t evolved to the point of understanding simple things. Take precautions with your body and your life, as you would with anything else.
I remain in my stance that a woman should use her common sense and understand that we do not live in a perfect world. I would love for us to treat this world as a place where people are not disgusting pigs, but unfortunately they are. “Not all men” you grunt, but enough men to make us terrified of being out alone at night. The same way you would avoid a stray Rottweiler, avoid a potential human dog [I’m tired]. It might be tame and leave you alone, but it might also maul you to death.  “Men aren’t animals, they can and should control their urges!” But CAN THEY REALLY??? Obviously some of them can’t. Many men have not evolved, and this is a fact we must live with.
This rapist is a rich white boy, so he got off disgustingly lightly and they used a university photo in place of a mugshot to spread the news, never failing to mention his swimming achievements. What if the rapist was black? What if he was Muslim? What if he was anything but a white American? What if it wasn’t a wealthy white boy with a reputation at stake and a father who can afford a powerful lawyer? When will there be a lawyer with enough morals to decline being a rape defendant for whom they KNOW is guilty? What factors would have to change in order for this to go differently? No money? Different education? Different skin? When will all white people have to pay for the crimes of one white person? QUESTIONS.
This is a post clarifying my stance on rape and rapists, but there’s a crucial part of my argument that I’ve chopped off for the next post, since this is already about 200 words too long. But, in my true fashion, it’s arguably controversial. So I had to set the foundation of my beliefs with this post.
In the meantime, read this part of the letter by the rapists father and clench your fists with me. 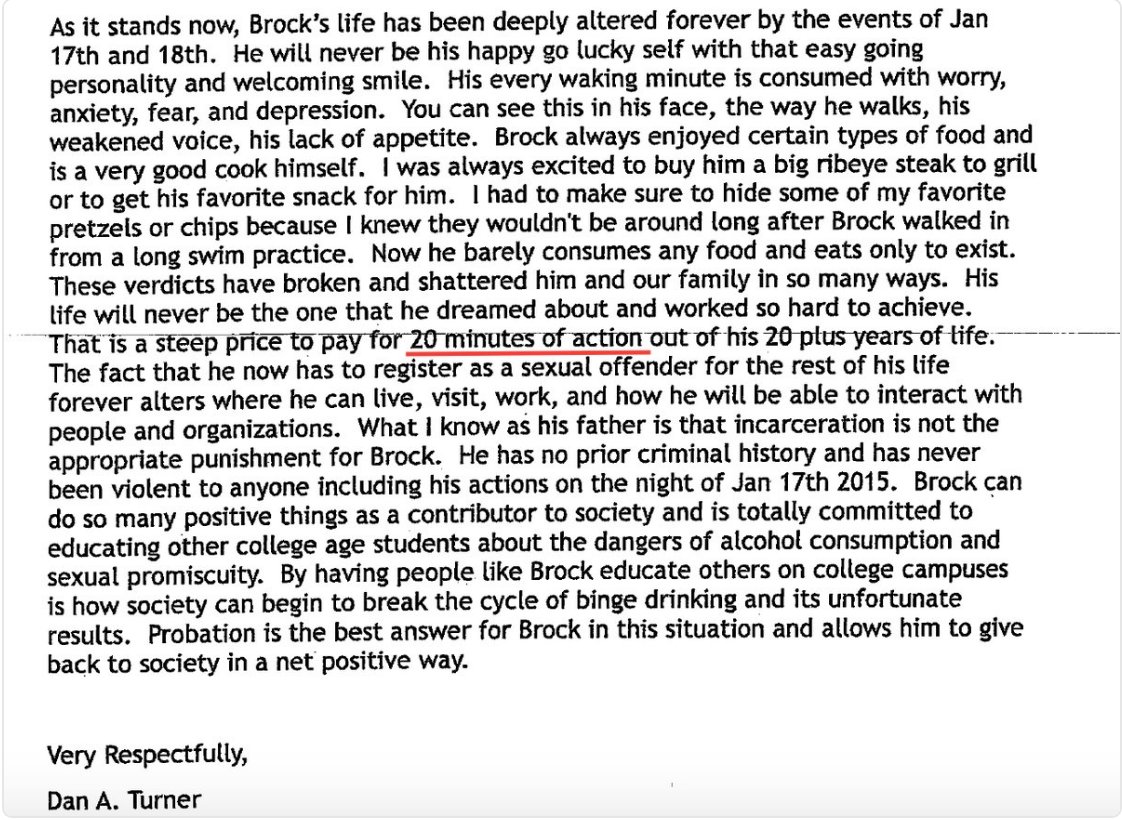 One thought on “TW: It is always the rapists fault. Yes, even just for "20 minutes of action".”