I’m hoping there are other people like me, because I am an idiot. Throughout my first two years of university I, once an avid bookworm and arguable favourite of the English literature department at school, began to loathe reading. I even subscribed to TWO analysis websites [yes, I paid for them] just so I wouldn’t have to actually read the books and do any work. And then I realised that we actually had to do work in preparation for class, so I just didn’t turn up. What a role model I am.
Anyway, I’ve always been a stubborn mule and the summer holidays are proof of this, because I’m now currently reading four different books. Or I was at the time of writing this.
It’s like this: tell me to do it and I won’t. I’ll do it if and when I want. The books that I’m currently reading are WILDLY different to each other, and I like to do this so that I can move onto something different; when non-fiction gets too heavy I can move onto gothic to give me a drastically different setting, and then onto crime to bring me nicely back into the real world. Here’s what I’m reading. 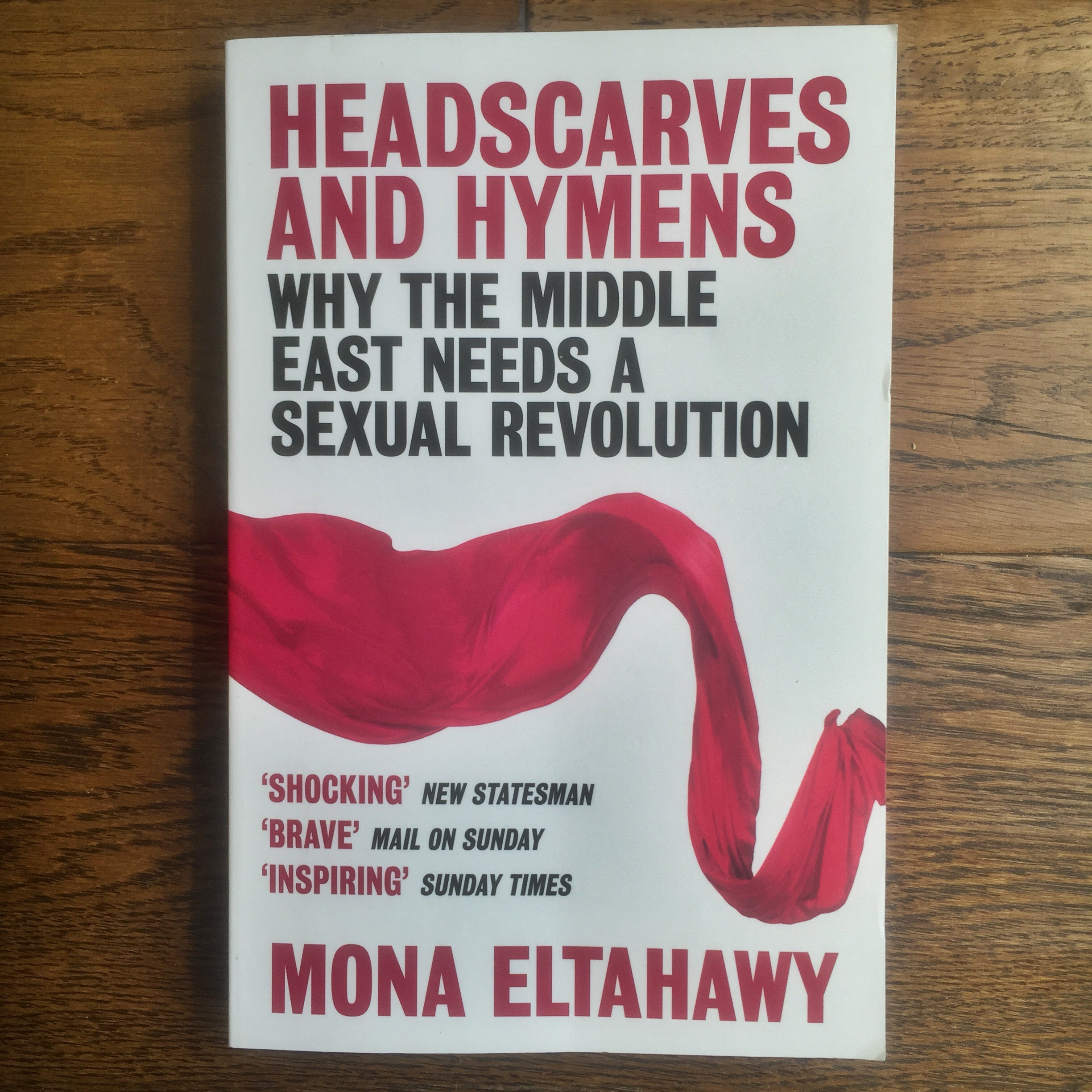 Headscarves and Hymens: Why the Middle East needs a Sexual Revolution
by MONA ELTAHAWY

So I’m reading this for both university and for my own personal reading, and anybody who knows me should know my hostility towards this woman. In short, I despise Mona Eltahawy and so I’ve decided to spend the next few months of my life destroying her argument. Or so I thought.
After the infamous niqab debate, a boiling hatred rose within me and I swore Mona as my arch nemesis in life. This woman who basically believes that women should not have the right to wear the niqab – for feminist reasons – wrote a book explaining her extremely radical views (as you can tell from the title).
Now, don’t get me wrong, I still completely disagree with her way of thinking, but reading this book has opened my eyes a little. The power of books, huh? I see things from her perspective a little better now, and I found myself nodding in agreement to a few of the things she said, and for this reason I just can’t stop reading. Regardless of its content, I know a well written book when I see one, and I am enjoying this one.
Still, I don’t agree with her belief that Middle Eastern women must be ‘liberated’ and must ‘rebel’ against Islamic politics. She states that she was ‘traumatised into feminism’, which is fair enough,  but what isn’t fair is lobbing each and every non-Western woman into a group that she intends on ‘saving’. This is grossly Orientalist. Whilst agreeing with certain points every now and then, I still, as a whole, disagree with her views. I’ll get back to you when I’ve read half the book. 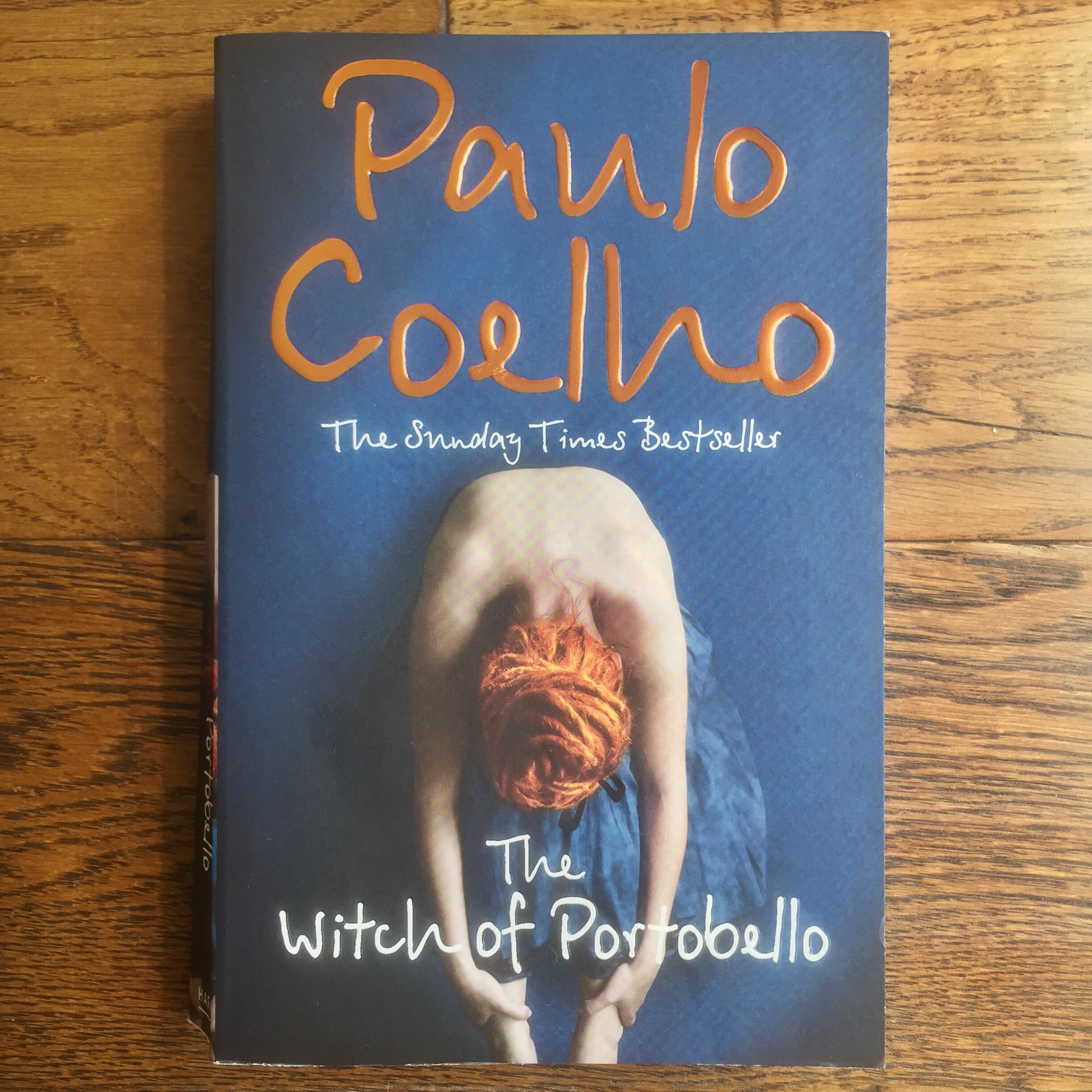 The Witch of Portobello
by PAULO COELHO

This is another one for both university and pleasure. Surprisingly enough, I haven’t read The Alchemist *le gasp*. Joke. Just gasp. I hate French. I haven’t read much of this to make an informed opinion, but I can say that this is the first time a blurb has really attracted me, and upon reading it, I really enjoy the style of writing. I’ve also never actually read a novel like this before [the story of a woman told only from the perspective of her friends and family – a sort of biography], and it was a nice change. I will also tell you the reason for me reading this; it is an ATTACK on FEMINISM!!!!! Yes!!! The woman in question is a strong woman because of her embracing her feminine self, rather than her trying to be like a man! Naturally, I had to read this after the statement acknowledging that “we are different genders”.
“If you think like a man or behave like a man, if you try to go for the same rights – you lose this beauty of the feminine soul.” 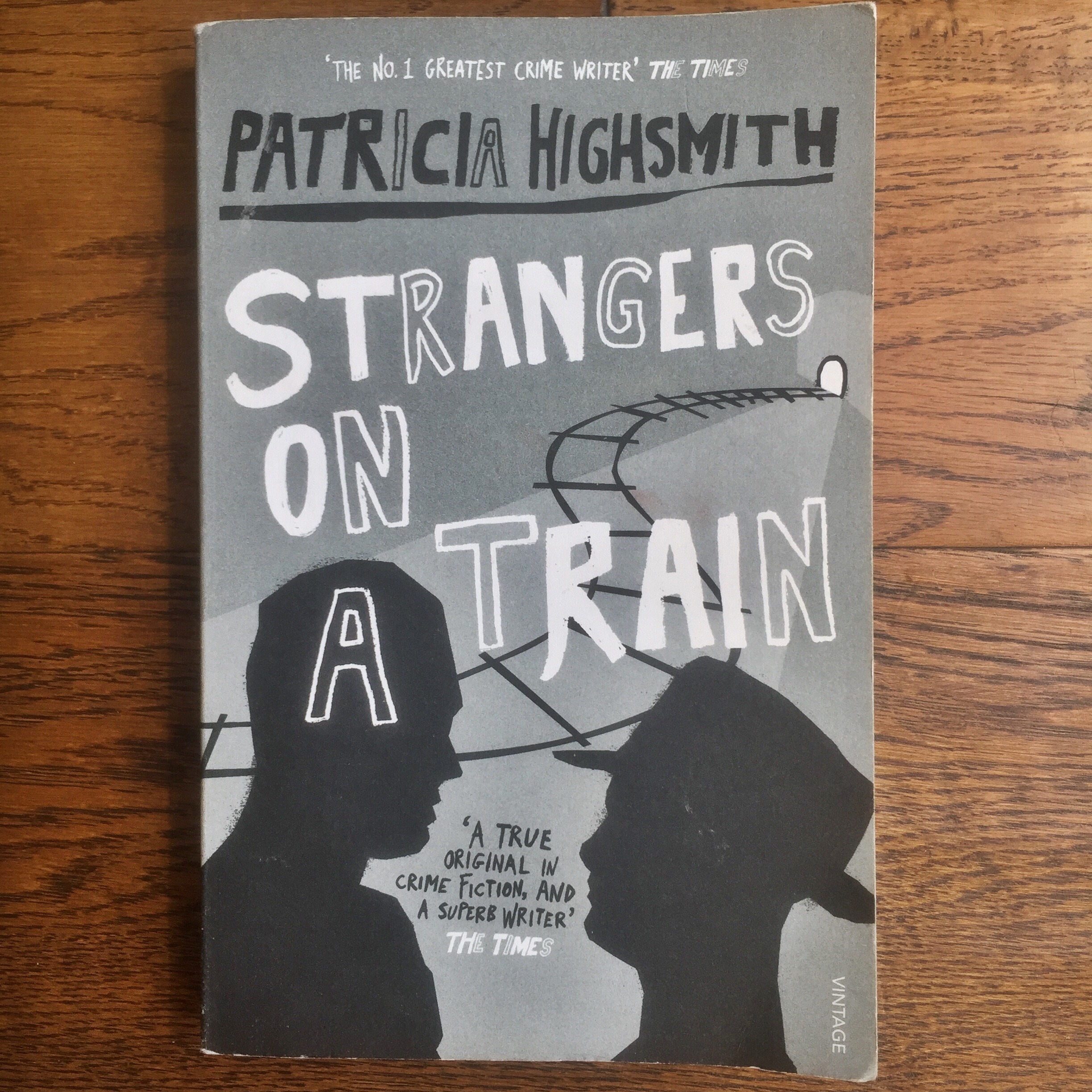 Strangers on a Train
by PATRICIA HIGHSMITH

This one isn’t for university, but solely for my own personal entertainment. It was in my reading list last year and I never read past the first few pages, due to time, but after my last exam last month I remembered how much that book actually interested me, and so I endeavoured to pick up where I left off. Although Patricia Highsmith was a very controversial character, I do love her style of writing. Both main characters are wildly different from each other, yet they’re characterised so well. If this wasn’t good enough, so far it’s the supporting character of Anne who I think is my favourite?  She also wrote the Talented Mr Ripley. Anybody interested in 20th century crime fiction or contemporary American literature must read this.

Guy meets a strange Bruno on the train. Bruno learns that Guy has a Miriam (a cheating wife who he is trying to divorce), and proposes the idea that they ‘exchange murders’; Bruno murders Miriam, and Guy murders Bruno’s father. It’s the perfect crime – both men have nothing to do with each other so can’t be suspected. Except Guy doesn’t take Bruno seriously, and when he does kill Miriam, he’s consumed by the guilt that he is now an accomplice. Don’t worry. This all happens within the first few pages, I haven’t given anything away – the purpose of a crime/detective novel is not the crime itself, but the discovery of the murderer. In this case, Strangers on a Train is a reverse detective novel. We know who the murderer is, and we know how it happened. Now we just need to wait for him to be found. Compelling, I know. 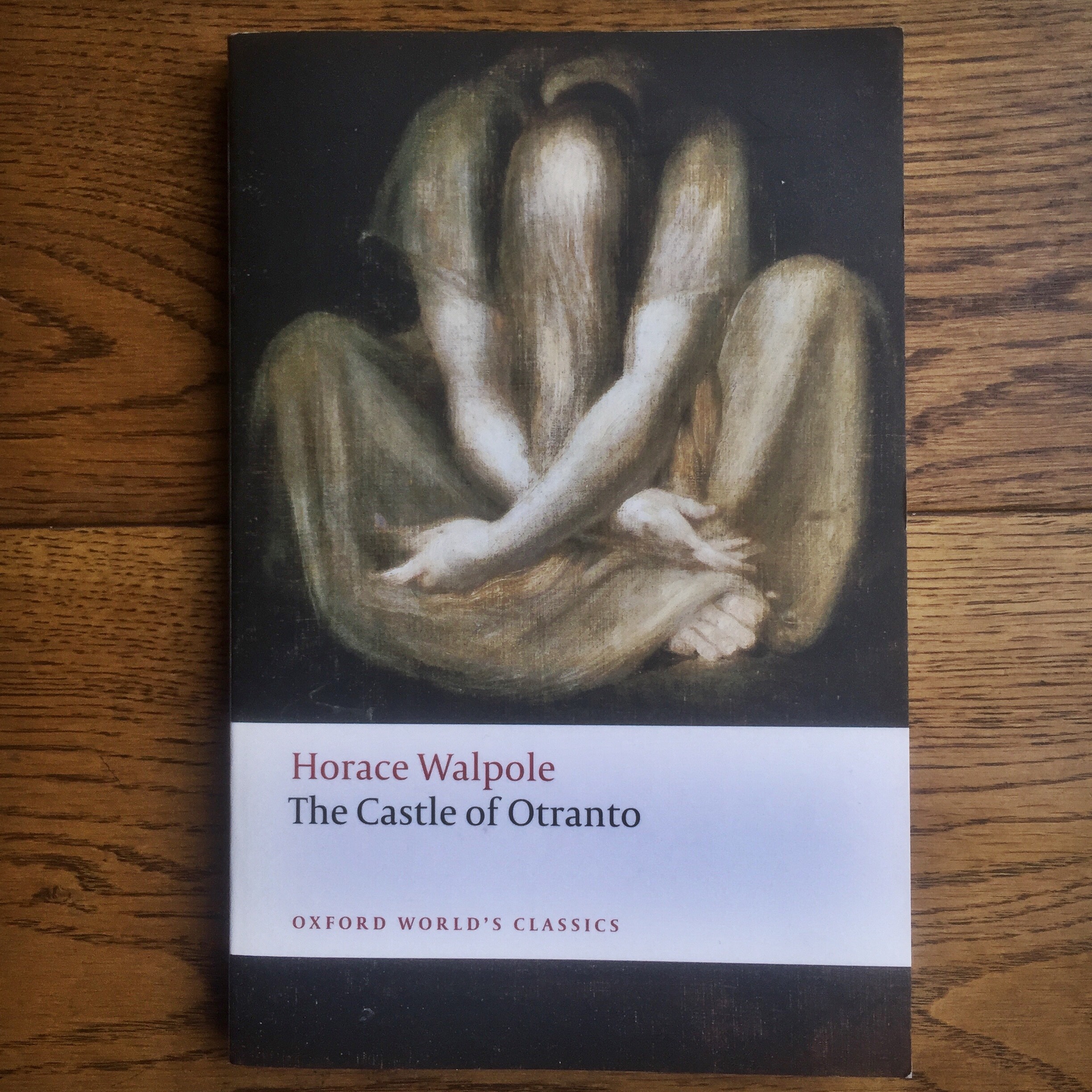 The Castle of Otranto
by HORACE WALPOLE

For university, but not until the second semester. Basically, come February, if this were a different book I’d have to read it all over again. But it’s Castle of Otranto – this is not just any book. This is a book that every English student or book nerd should have read by their A level/college years.

Manfred’s favourite child, his son Conrad (obviously), is killed on his wedding day. This disgusting, terrible man, who is a father and a husband to two virtuous women, declares that his daughter-in-law Isabella must now marry him and give him a son. She obviously doesn’t want to marry this beast so she runs away, aided by a peasant, and he literally chases her to trap her into a miserable life. That’s all I’ve read so far, I’m halfway.

This is the novel that initiated the gothic genre; Poe’s short stories? Stoker’s Dracula? Probably wouldn’t have happened without it. The quintessential gothic novel, indulging in every single trope of the gothic genre (obviously), I don’t know how I got away with not reading it back when we studied gothic literature in year 12. Anyway. I’m halfway through and I am thoroughly enjoying the dark atmosphere, the supernatural, the trapped damsel and the frustrating suspense. It’s great.

One thought on “What I’m Reading [July]”