Photo of the day 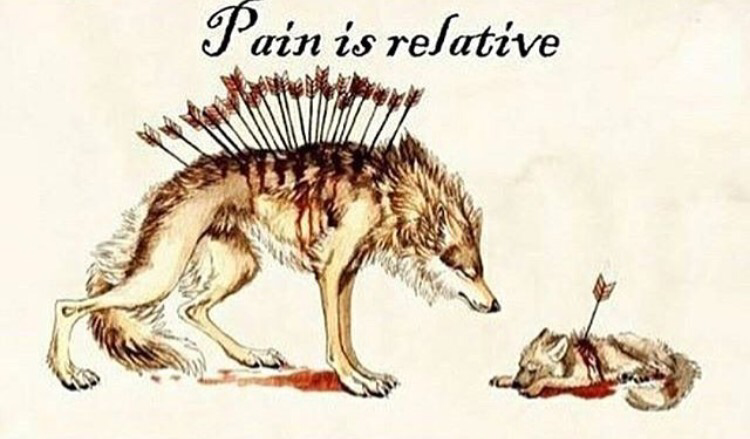 I had a really long rant on my snapchat today. Had to choose between that issue and this, and I chose this. Part of me also wants to talk about the absolute £@$%FASKJ$35 that is Citizen Khan, but I won’t.
This image conveys probably one of the most important messages ever; simply that others may not be as strong as you and you can’t speak for anothers pain. Pain is relative. You CANNOT EVER attempt to talk to someone about their situation whilst comparing it to your own. Don’t ever say you had it worse, don’t ever say they’re overreacting. Even if the exact same things have happened to you, and I mean the exact same, you still have not been through the same thing.
Repeat after me: your chemicals are not the same as theirs.
The way another person perceives something will not be the same way that you do. The way another person reacts to something will not be the same way that you do. Something that will be forgotten by you within seconds can play on the mind of another for years. Something small to you may be something big to them and vice versa; learn to empathise without having to compare it to yourself, and don’t judge another for having a different mindset to you. I think that’s one of the biggest mistakes people can make. If you want to comfort someone, telling them they’re going to be okay is tricky, because to me that makes things worse. There are better things.
If it’s a friend or a sibling, tell them jokes and try to lighten the situation (without being insensitive). If it’s a partner, hold them tight and say nothing. If you are an acquaintance who doesn’t know what to do, you may tell them that they’re going to be okay, that it will get better. I’d never be in such a situation with someone who wasn’t close to me, but I know some people may be. Whatever you do, don’t ever say “its not even that bad” or “Ive been through the same thing”.
Do not, because you haven’t.