Robin Williams was a man who played an undeniably huge part in our childhoods when our eyes were glued to the TV when Jumanji or Mrs Doubtfire were on, and I can’t deny that, although I don’t place any higher importance on a celebrity than anybody else, his death really saddens me. Apparently it was a suicide, brought on by depression. I understand many people are upset at this news, but the responses I’ve read are amazing (see: ridiculous). This is the comments section of an article posted by Daily Mail (although I do admit I regularly read the comments section for bants, this one in particular is perfect for highlighting a problem that exists in society): 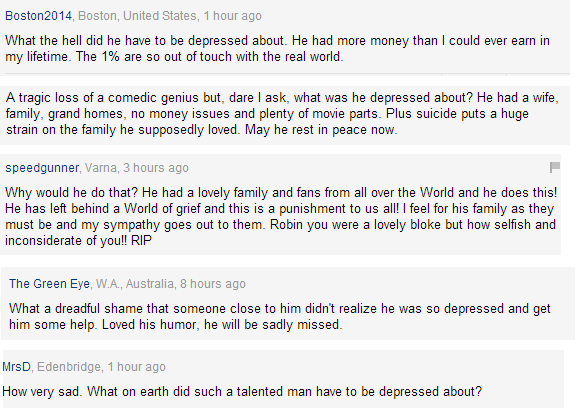 1) Apparently fame/fortune deny you the ability to suffer from depression.
Okay, moron, and all other morons who share this view, are you aware that nobody chooses to be depressed? Are you aware that it is an illness? Are you aware that you could be famous or rich and suffer from a physical deformity that is out of your power? Are you therefore also aware that you could have everything you ever want in the world and still suffer from a mental illness? Other people having it “worse off” than you does NOT negate your unhappiness. And never let anybody think it does. It doesn’t matter if people in other countries are being bombed or starved, that does NOT mean you aren’t allowed to be unhappy or suffer from a mental illness. You DO NOT CHOOSE TO SUFFER FROM A DISORDER.

2) Apparently, it’s selfish of you to end your life due to something that you could have coped with if you dealt with it properly.
Are you aware, idiot, that mental illness is NOT any easier to cope with than something that is physical? Correct me if I’m wrong, but the brain is a part of the human body, and an extremely important one might I add. I could argue that it is harder to cope with. A physical hindrance is something that people can see and perhaps therefore show more empathy towards, and sadly, most people see them as a ‘real’ illness. Mental illnesses can, in many cases, affect you more than a physical illness.
Most times, people don’t know about another suffering from mental illness. Most times, people will refuse to even believe in the legitimacy of depression, anxiety or an identity disorder etcetera and it makes me so mad. Most times, people will even refuse to accept they have a mental illness themselves due to the attitude people have towards it (read: people who ACTUALLY have the illness, not stupid little girls posting statuses about how depressed they are because their parents didn’t let them go to a concert). This is due to being ridiculed with questions like “oh just try to be happier”, or “its all in your head” (the worst) or “You have a roof over your head and food on your plate, other people have it worse than you.” (just as bad). NEVER let anyone make you feel embarrassed, or that you can’t be unhappy because other people have it worse. NEVER let anybody make you feel like its all in your head. The attitude people have towards disorders is WHY people hide it. It is WHY people refuse to seek help for it, because they feel like maybe people are right, that it is entirely in their head. They feel like they will be ridiculed. Imagine being afraid to go to the doctor, or anybody, for help, because he will just laugh and tell you to sleep some more or exercise. Or that he’ll give you medication and you’ll feel like a nutcase.
I cannot stress how much I despise people who make light of mental illnesses, and I despise even more people who don’t believe these illnesses exist (doctors especially). You can’t cancel plans because of depression or anxiety, so you have to say something else that people will believe, and  you have to hide it. And that just makes it worse for you as you are keeping it to yourself, you’re like a shaken coke bottle ready to explode and its a vicious cycle. It is pathetic that this has to happen. Do you know why people do not take disorders as seriously as they should? It is largely because of people misusing the terms, and it disgusts me.

DON’T. PISS. ME. OFF.
You are having a bad day, you are NOT depressed, shut up. He’s just not interested in you, he’s NOT bipolar, shut up. You do NOT have four different personalities, you just have the ability to act differently in different scenarios, fuck you. These are REAL disorders, that people actually SUFFER FROM ON A REGULAR BASIS, not your lame ass pretending you have an illness and laughing about it. These are REAL illnesses that affect peoples lives, not just their mood that day. This is something I feel very strongly about, so expect more on this. I really wish people would educate themselves, and that they would teach about mental illnesses properly in school, in compulsory education. Maybe then people wouldn’t be so thick and ignorant.

“No matter what anybody tells you, words and ideas can change the world.” – John Keating (Dead Poets Society)

Now playing: Walk Away – The Script

6 thoughts on “You're NOT depressed, the weather is NOT bipolar.”